I like to doodle. Always have. I've been a doodler for as long as I can remember.

I remember making BIG scribbles on pages and then filling in all the holes with patterns and colors when I was in kindergarten. I did pages and pages of them. Come to find out...those things are called "Zentangles" now. Guess I was a head of my time. LOL

Well, now, my doodles and scribbles have evolved. I would hope so after 50 years. (See some of my "zentangles" from a few years ago...click here.)

I've been seeing lots of hand turkeys this week...guess cuz it's Thanksgiving time. DUH! LOL :)
It made me want to do one. So here is my interpretation of a hand turkey. 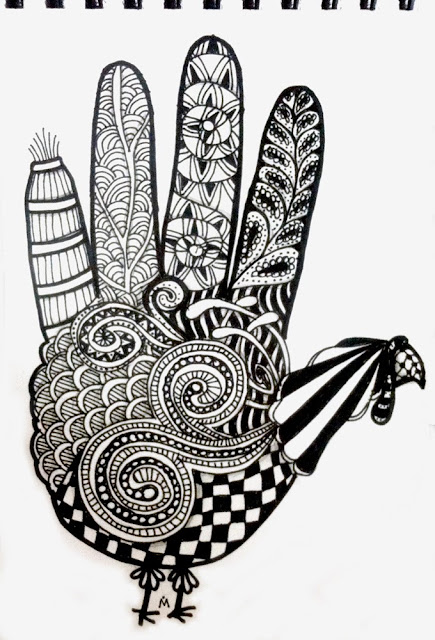 Ain't it cool!!!! I see a series developing.

Gobble! Gobble! Hope everyone had a wonderful and safe Thanksgiving!!


Posted by whimzeenator at 10:18 AM No comments: 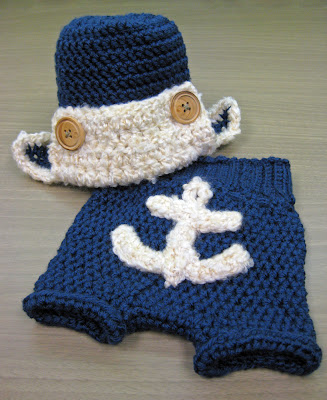 I got a custom order off of a recent baby gift I made for a coworker. She wanted the aviator hat plus a pair of bloomers/diaper cover with an anchor appliqued on the butt. It turned out SOOOOO cute!

Just as before, I used pattern from The Sequin Turtle. Then I found Widdershins Soaker by Sabra. It's a really cute and easy pattern. And I used the same yarn as before... For the hat Red Heart Soft in navy plus good ol' Lion Brand Homespun in cream. I think it looks just like the fleece lined hat. Then I found the wooden buttons at Hobby Lobby.

The size was for 0-3 month old baby. I did shorten the butt just a little. 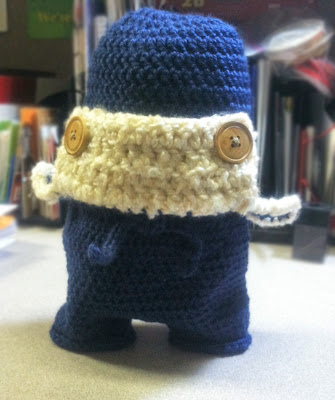 The bloomers could stand on their own...Looks like Domo is ready to join the US Navy!!

The anchor...well that's a different story. I looked around for patterns. Found some but they put them together in pieces. I HATE TAILS! I want as few tails to weave in as possible. So...I started winging it.

Here's my crochet applique pattern for the anchor that I created as I went.

For the top loop:
Chain 8. Slip stitch into first chain making a circle.

For the shank:
Chain 10 off the circle. SC into second stitch from the hook.
SC 7 more stitches up the chain toward the circle.

You can either slip stitch toward the bottom or cut yarn and SS into second stitch from the bottom. If you cut, leave a SUPER long tail to use to sew onto bloomers.

Use tails to sew onto bloomers or crocheted piece. Be sure to keep top arms and shank straight. Give the bottom arms a curve. 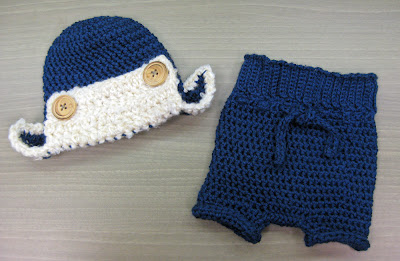 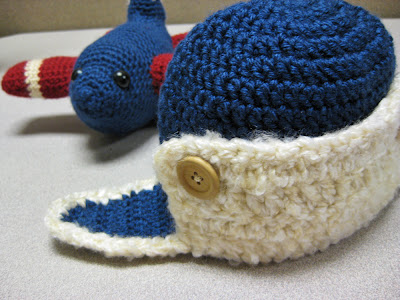 All together now... AWWWWWWWWWWWWWW!!!
﻿
I easily finished the aviator hat from The Sequin Turtle. It is TOO cute!! I couldn't help myself after I finished the airplane from AVPatternShop. I started the hat Sunday evening and had it finished before I went to bed three hours later. All I had to do was go get buttons. You know...it's hard finding the right button for projects but I think I nailed it with this one. 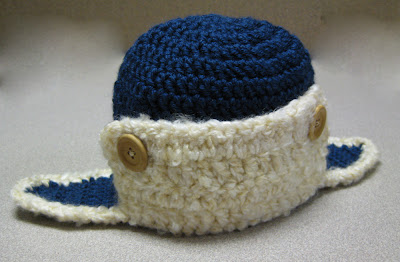 For the hat I used the same Red Heart Soft in navy I used on the airplane plus good ol' Lion Brand Homespun in cream. I think it looks just like the fleece lined hat. Then I found the wooden buttons at Hobby Lobby.
The pattern is fabulous! Easy to follow and turns out great. I might have made the earflaps a little longer. I even toyed around with the idea of making them long enough to button under the chin or flip on top of the hat. But I like how the do they're on thing. 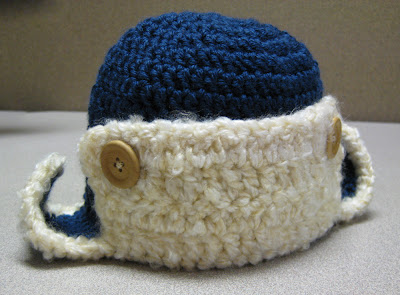 Now I want to make more of these cute little things!
Who else is having a baby?!?! 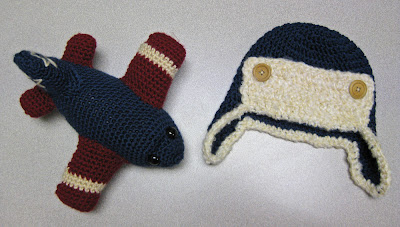 Off We Go Into The Wild Blue Yonder 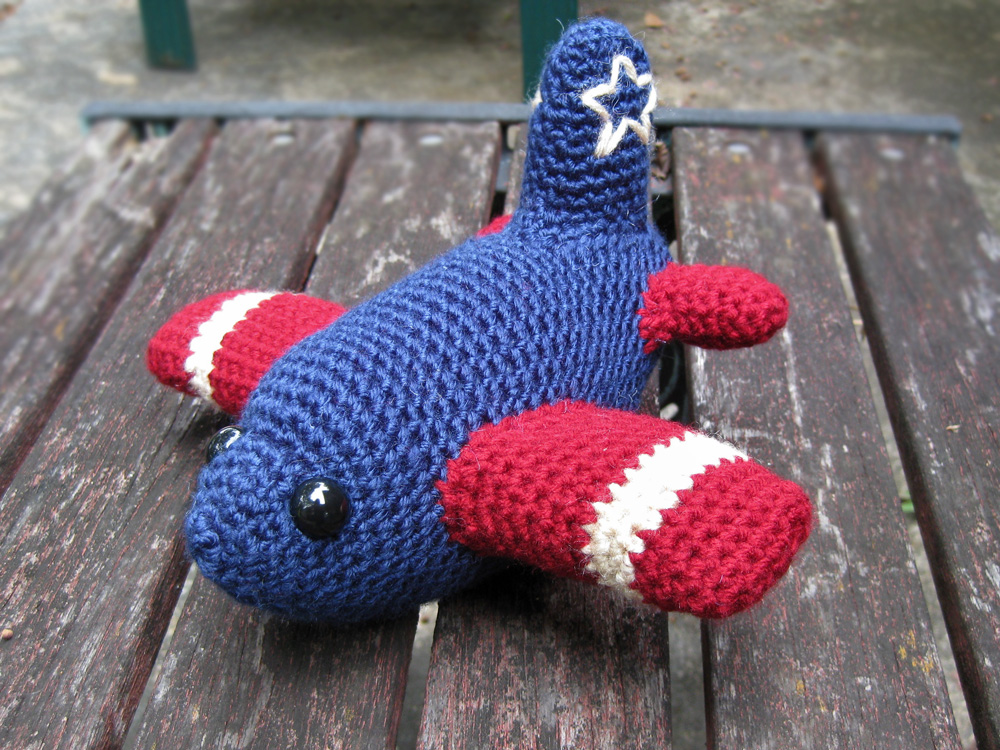 I made a stuffie! I think it turned out great.

A coworker is having a baby boy in August. She's decorating his room navy and dark red and in airplanes. So I decided to make him a stuffed airplane and an aviator hat.

I got the airplane pattern from AVPatternShop on etsy and the aviator hat from The Sequin Turtle. 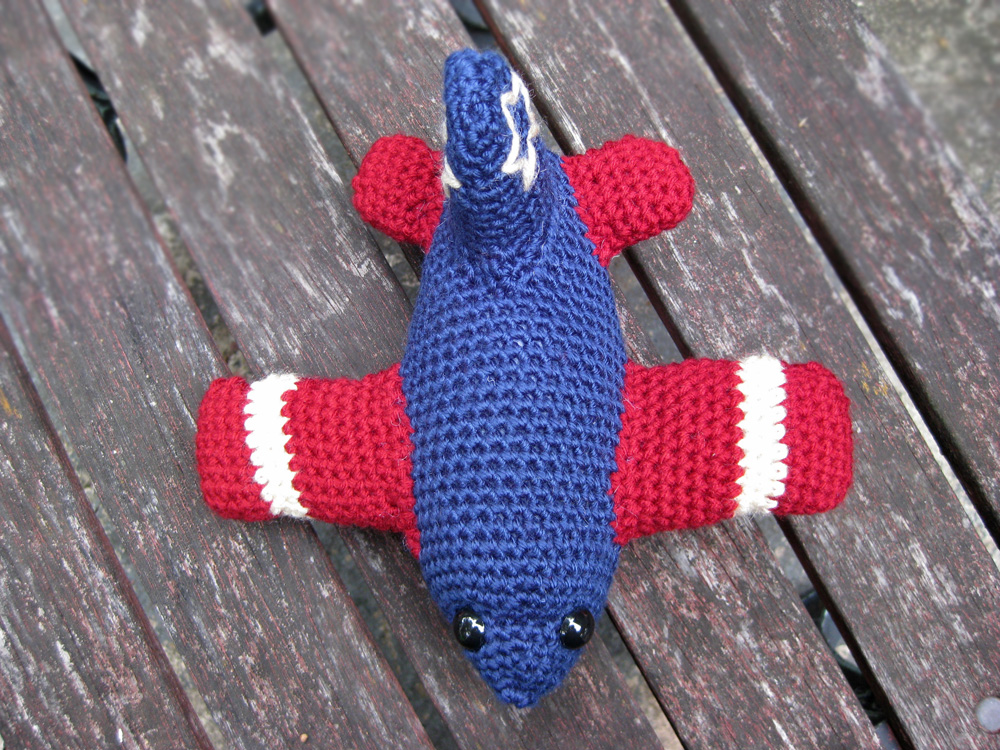 For the airplane, I think the original pattern used a DK weight (the pattern didn't specify) because they had 7 stitches per inch and the finished size was about 4.5 inches long. I used Red Heart Soft in navy, Loops & Threads Impeccable in claret and Vanna's Choice in beige. My finished airplane is 8 inches long. Much better for a baby.

The pattern is super easy. It does lack a little in the directions but it's easy to figure out. It said it was crocheted in a continuous spiralling rows but I found it easy just to slip stitch at the end of my rows and chain two at the beginning of the next row.

I haven't started the hat yet...that's next weekend's project.

Too cute!
Posted by whimzeenator at 5:49 PM No comments: 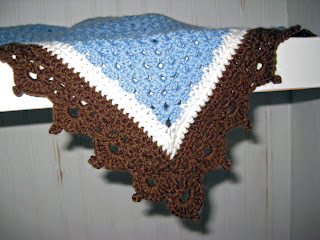 My neighbor is having a baby boy later in May :) so I started an afghan for them using Hobby Lobby's Baby Bee yarn in Baby's Blue, Naked and Chocolate. I wanted to use a soft acrylic so the blankie could be tossed into the wash and not worried about. Go ahead and spit up on it...then toss it in to wash!

I got a late start. The baby shower was yesterday and I only had 21 inches crocheted on the blue part. I want to have about 36 inches before I start the border. I did a quick corner to show how it will finish out before I wrapped it for the shower. I'm loving the color combo! AND it goes great with his room. YAY!!

I felt terrible taking it back after the shower but she loved it!

The blue section is just a granny square bordered in off white single crochets. The brown edging is #212 from The Complete Crochet Border Designs by Linda Schapper. 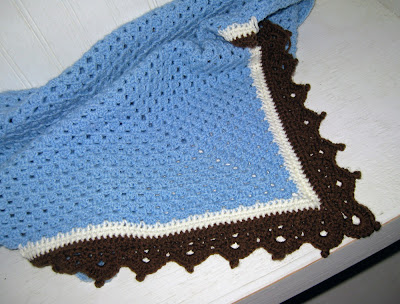 I've got a month to get this thing done...gotta get off the computer and get to work (after I rip out the corner work).
Posted by whimzeenator at 4:51 PM 1 comment:

Over four years ago, I was stumble into a knitting forum and things haven't been the same sense :)

This week I had a wonderful surprise from one of the very talented BunkerBabes...just because. :) 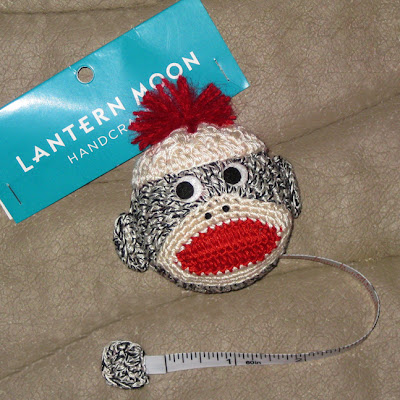 It's a perfect gift from a perfect friend. Thank you!!!!!
Every time I use it, I will always think of you.

Maybe if I hurry up and admit it I can work out a compromise because I just can't quit it. I'm addicted to my Nook.

Last June I bought  myself  (and my son and mother) a Nook. I was thinking it was just a small e-tablet I could surf the net with and MAYBE...MAYBE read a book every now and then. See, I've never been much of a reader. Whenever I read a book with real pages, I fall asleep. Even magazines. I fall asleep. When my son was a child and I would read him a story, I would wake up with a sharp little elbow jabbing my ribs and a sweet voice that was suppose to be asleep "Mommy! You fell asleep again! Finish the story!!" see. reading and me never mixed.

NOW!!! I can read a book on my Nook and NOT fall asleep!!! Not sure why but who cares! BUT I'm reading non-stop. Book after book. Day in and day out. When I finish one book...I start another. I keep my queue full because I've got to have something when I finish.

BUT there's an unwelcome side effect (or two) from reading so much. I'm not getting any knitting or crocheting done. Haven't even been interested in doing any. O.M.G!!! Did I just say that?!? And, I've had to get a pair of glasses just for computer use. Hmmmmm...

Wish there was a way I could knit and read at the same time but I'm just not that talented or coordinated.

Then last Friday, I was lucky enough to get to order some Wollmeise in some FABULOUS colors. I think my creative juices might be reigniting. I was able to procure some Lila Lundmilla and Neptune Lite from The Loopy Ewe. Then Sundara Yarn had a close-out and I snatched some Water Studies 117. 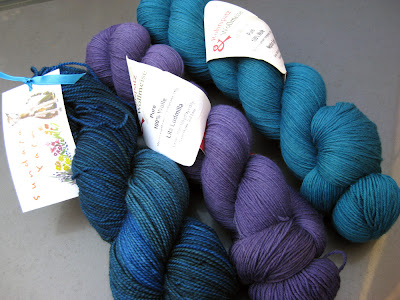 I LOVE THE COLORS!!! I must do something with them. Maybe some fingerless mitts or a lacy scarf? I don't know. I'd love to do some fair isle socks but I want to see the color and it would be hidden on my feet.

I've got some more Wollmeise in my stash but I can't decide what to make with it. I want something special. 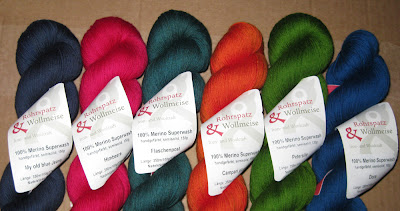 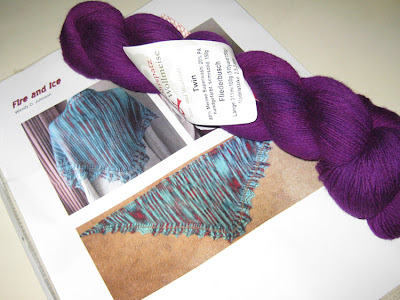 Any suggestions?? Something to drag me out of this addiction.

Posted by whimzeenator at 11:53 AM No comments: 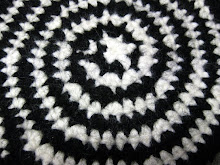